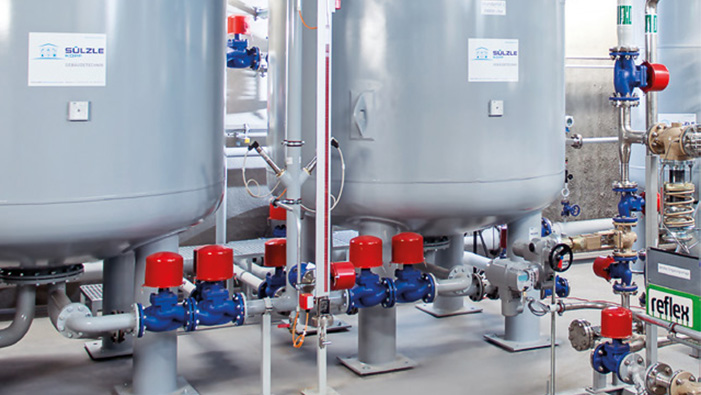 Since the mid-1960s, the Böblinger heating plant “Im Grund”, located about 20 km southwest of Stuttgart, has been supplying houses in neighbouring residential areas with district heating. After more than half a century, 2015 was the year of technical renewal. The new pressure maintenance system was integrated into the inventory by SÜLZLE KOPF Gebäudetechnik while the ongoing heating plant operation. The same applied to the connection to the central control technology of the Stadtwerke Böblingen as well as the safety-related integration into the existing plant. From day one, the changeover went smoothly. The 14-day trial operation was followed by the official commissioning in summer 2016. The new pressure maintenance had passed its first major test immediately: Due to a leak in the district heating network there was more than 15 m3 water loss per day. However, the new plant was able to cover this without any problems. The good cooperation has led to the conversion being successfully carried out during the ongoing operation of the heating plant. “According to the operator, maintenance effort has been reduced by more than 60% compared to the previous system. And the new speed-controlled pumps have significantly reduced power consumption,” says SÜLZLE KOPF project manager Alexander Kessler.

SÜLZLE is one of the Top 100 of innovative companies 2016