You are here: Home1 / SÜLZLE Cup and TSG Experience Day with a great event program 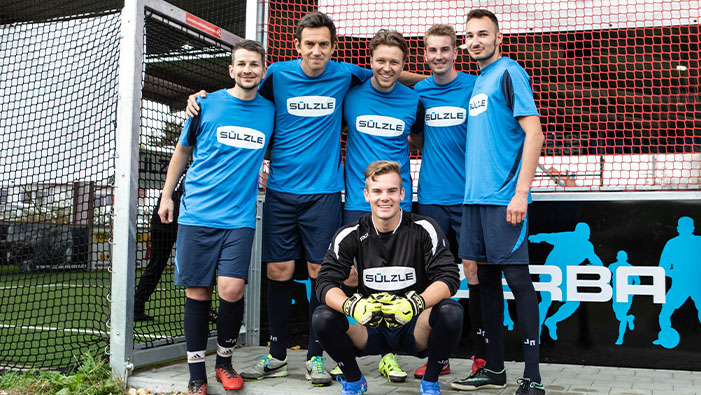 After a one-year break due to the Corona pandemic, the SÜLZLE Cup entered its fifth edition last Sunday. As part of this year’s TSG Experience Day, games were played for the first time on the artificial field in the new open-air hall next to the Bizerba Arena. A total of twelve company teams, including the SÜLZLE Group team, competed against each other in two groups of six and determined the finalists in exciting preliminary round and two semi-final matches. In the end, the Azzurri kickers won and took home the challenge cup. Congratulations!

Parallel to the SÜLZLE Cup, TSG Balingen had again put together a great event program for young and old, just like on the previous event days. Among the absolute highlights were certainly the presentations of all TSG teams for the coming season as well as the visit of the former table soccer world champion Oktay Mann at the AOK booth, where every visitor could try his luck to beat the “king of table soccer” with six goals ahead in his parade discipline.

The foosball table at the SÜLZE booth offered the perfect training opportunity to prepare for the duel with the pro. In addition, souvenir photos could be taken at the photo box and information about the training opportunities at the SÜLZLE Group could be obtained. For this purpose, trainees and dual students from SÜLZLE Stahlpartner were available to all interested visitors, who reported first-hand.

We would like to thank TSG Balingen for the great organization and the hosting of the entire event.