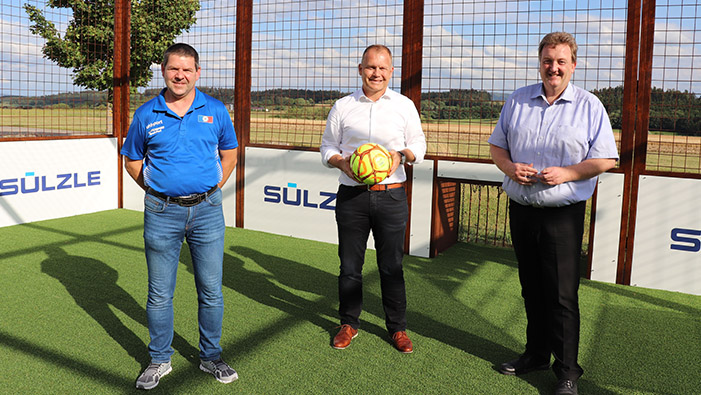 From the left: Michael Kopf (Chairman of SV Rosenfeld), Heinrich Sülzle (Managing Partner of the SÜLZLE Group) and Thomas Miller (Mayor of Rosenfeld)

Mini arena made of steel awakens joy of playing

Fast play in a small space. Dealing with the restrictions imposed by the Corona pandemic is a major challenge, especially for children and young people. To keep the youngsters on the move, the SteelCage on the football grounds of SV Rosenfeld offers a perfect cross-club training alternative for all teams. On the occasion of the 140th anniversary of the SÜLZLE Group and the 100th anniversary of the Rosenfeld sports club, the SteelCage, which was custom-made by SÜLZLE, was equipped with a high-quality and safe artificial turf pitch as well as new perimeter boards.

On 28 July, the new artificial turf in the SteelCage was officially inaugurated with a small training game.The mayor of Rosenfeld Thomas Miller, the club chairman Michael Kopf and the managing partner of the SÜLZLE Group Heinrich Sülzle were enthusiastic about the fast game in the cage. “We have been supporting the work of the sports club and the city of Rosenfeld for many years now and are pleased that the mini arena is a useful addition to the local training facilities,” said Heinrich Sülzle. “Our youth work traditionally has a high priority. We would like to thank the SÜLZLE Group for their great support also in our anniversary year. You can clearly see the young kickers having fun playing soccer in the SteelCage”, emphasizes club chairman Michael Kopf. SV Rosenfeld also plans to hold a Cage Kick tournament in the modernised Mini-Arena next year.